The world-reknown group of Hash House Harriers has its origins in Kuala Lumpur, Malaysia, in 1938. Among its founders, one A.S.Gispert, an Aussies bastard at that, is in most circles given credit as the main organizer and therefore leader of this lot who for no uncertain reason felt the a jog around the padang in downtown KL on a Monday evening was most needed to sweat out the previous weekend`s over-indulgences, ie. Beer, booze, grog, piss, and the occasional does of clap. Mind you the sheer nonsense of heavy exercise was the furthest thing from Gispert`s brain, And therefore the jog was a mere lumbering trot at best. Well, of course, when his Mates saw that he was making it back to the barracks without suffering a bloody heart attack they soon followed suit and before long a mob of a dozen or two were soon seen pounding the sod every Mon. evening But hell hath no fury than a sweating man without a "cold one" in his hand and soon this mob began yearning for some liquid refreshment…. And who to the rescue but the local WOG who just happened to own a provisions store across the way from the padang and decided one evening to take a closer look. Egads ! what are these bloody fool poms up to thought Mr.Wun Hung Lo ? Looks like these fookin orang puteh need some libations whereas he quickly returned with a bucket of ice cold frosties much to the delight of the over-perspiring joggers. The grog was consumed quicker than shite through a mayberry goose ! At about this same evening "G" was beginning to ponder the notion of taking his ever-growing lot of joggers out into the city and local boonies for a more interesting jog, basing it on the old UK sport Hares n Hounds, ibed. Where the hare sets off to be pursued by the hounds. And thus it was, with all heading out further from downtown KL and partaking of the principles which later became identified with Hash House Harriers. By the way, the wog at the provisions store wasn`t about to look a gift horse in the mouth either. He quickly traded in his bicycle for a moped with a cart attached and following these harriers every Mon. carrying several dozen Golden Harp, thus becoming the first official bemo in hash history.

TAIPEI HHH was off and running in Feb.1973. Don "Organ" Hammond read an article written by the Singapore HHH which appeared in a military pub named OFF DUTY the month before. Geee, said Organ what do you think of this shit, Zeke? This moron agreed that it sounded a bit half-baked, but was game for almost anything when it involved drinking piss. After coaxing about another seven or so rumheads from the local chapter of Very Few Whites(VFW) over the next few weeks, the first run was set with a mind-numbing turnout of eight. Included besides Organ and Zeke were: Bob Jacques, a d.o.m. with a nasty habit of buggerin one-legged whores down at Bloody Mary`s; Mike McFarlane, a retarded Narvy Steward who liked to brag about pissing in his captain`s salt shaker; Dave Bowers, an overweight pedophile still serving time in the USAF as a food taster; Clarence the clit O`Day, a red-headed wooftah from the Gold Coast who thought the asshole not the pussy was the entrance to the womb; Maj. Dundee, a former Spec Forces type until one day his chute didn`t open all the way resulting in severe brain damage and a prosthetic prick; and finally Chuck E. Cheeze, a balding middle-aged government civilian with more personal problems than Clinton`s legal team, none any lesser than that of his step-daughter playing tonsil hockey with half the faculty of the American school. Taipei became one of only about some fifty(50) hashes in the world at that time. All runs used live hares who were given a half hour head start. It wasn`t until its 16th run when a visiting hashmen from Jakarta H3, Swordedge Wilkerson, informed Taipei about such thing as checks, backtracks which later made our runs all that much better. The hash grew in size very slowly; the hares were responsible in supplying the runs with libations; Most of our piss was bought through the military`s PX and a long time had good sponsorship from Schits. Although we were sadder Budweiser. The first local wogs to partake were; Tom the fag Wu, a latent bi-sexual with a preference for small dogs whose English was that of Elvis Presley and Prince Charles; David the elephant Chang, whose aka had nothing to do with his cock size but rather the size of his turds after eating at the Shin Lin night market. Both of these guys had the will but not the staying power and soon departed the scene but not before allowing more substantial types as Self-service, Harbor, Airstart, Doublecross, and Two-score to set in. Several years after its start, TH3 organized its first Mini-marathon(1976) open to the public. This was at a time when jogging was unpopular to say the least. The locals would look at a person jogging down the street as an escapee from the neighborhood nut ward. However, the mini-marathon took off and before long had to struggle with the local national running assn for control; the same fate met with TH3`s full marathon in 1977. Yes boys n girls TH3 brought the first full marathon to Taiwan`s runners, And NOT the ROC track & field fed. Besides initiating ballock-dragging races, TH3 has over the years done a bit of charity work as well. Although we steadfastly are not the alternative to the lions, elks, mooses, rotary, or Masonic temple. Yes, we did give of our time, money, blood to various organizations. And, yes, we shoul give again after all our present members have their own chauffer-driven Lincoln limos.

In 1975, after "Organ" refused to give democracy a chance within our ranks, he hauled ass and began the China Hash. Nothing lost, no tears shed. The split had NOT ONE FOOKIN THING TO DO WITH WOMEN IN THE HASH!!! The China Hash never allowed pussy for nearly two years later. "Stonedwall" Pinnick became the first formally elected leader of TH3. This guy despite the shortcoming between his ears more than made up for it with his bloody B.O. Like yeah all hashturds stink esp. on hash day, but, golly gee, this guy would make the Taoyuan landfill smell like lilies on Easter Sunday. Believe his name was changed to "shit Inc." before departing to the land of l.b.f.m. In any case, hash erections became a hash ritual; at first every six months it would elect a new committee, but then later on it was an annual affair. In 1977 the TH3 changed its run day from Sunday to Saturday meeting at the old VFW and later the FRA, mostly for the benefit of those imbeciles who lacked the common sense to call other members for a lift to the runs; it was in fact a pathetic waste of time esp. during the winter months with daylight at a premium. It was also during this time that our liquid refreshment came in part by draught due to the efforts of "Lubrikunt" aka Grease Nipple. His hard and diligent work as boozemasta for nearly four years ensured the hash had an ample suply of libations at all the runs. And lest we forget his right hand man at that time, the"Black Angus" from the land of Eskimo Nell. Whatever piss was leftover at the end of the run was sure as hell gone before Anus turned in the bemo if in fact he did turn it in; can recall more than a few times when Anus was missing come Sun. morn. The first World Interhash which TH3 made any big showing was 1988 in Bali. Since then TH3 has had a respectable attendance at each one, every two years.

As TH3 now enters its 29th year here are some facts/fiction worth raising your mugs to: Our total membership now totals some 670 names; 90% of our membership is made up of local Taiwanese, with the other ten made up of all sorts white n black trash; More softies are being drunk each week than booze; TH3`s financial status ranks higher than that of the 311th ranked company in Taiwan; two members have reached the 1000th run plateau; the average age in TH3 is 47.8 yrs; the ave.length of cock is 12.76cm; ave.wt is 113 st., and ave. IQ is slightly more than that of an empty Taiwan beer bottle-wot the fook anything more would be wasted for as Mother Hash would say: "All you need is half-a-mind" to run with the hash. And, speaking of Mother Hash, in Sept. of this year a small troupe from TH3 will attend their 3000th run in KL. 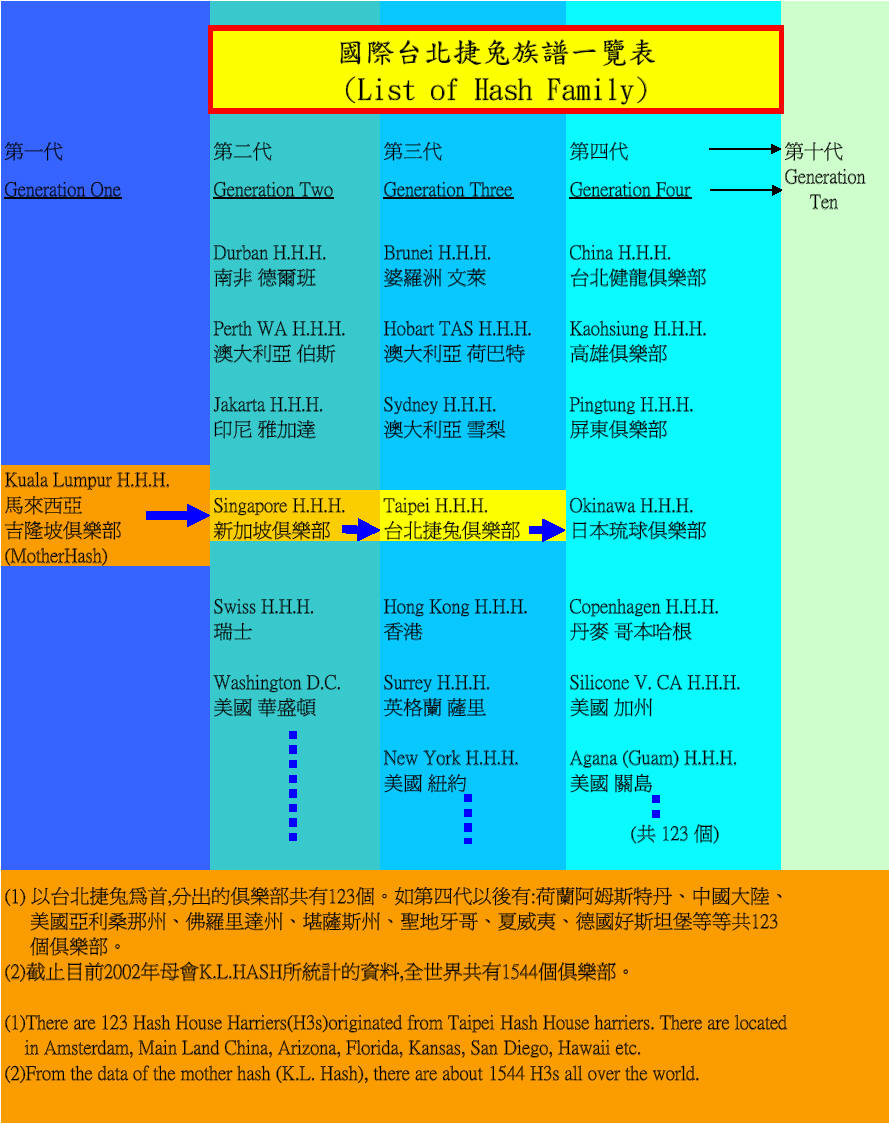